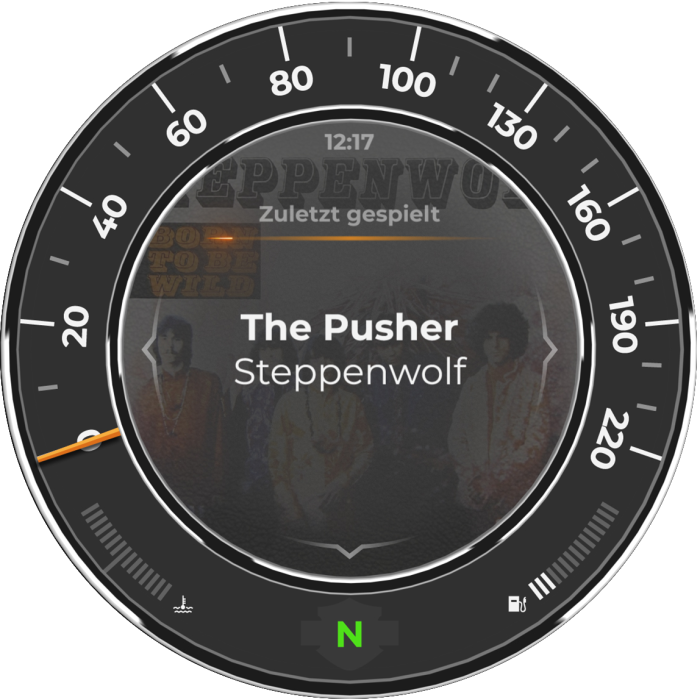 HD+ is a concept for a new hybrid cockpit for the Harley-Davidson Street Rod. Hybrid because it combines the look and feel of classic round instruments with the modern amenities of today’s infotainment systems. This can already be seen in the general construction, where we combine a classic hardware speedometer needle with a digital screen. This screen is again divided into two areas by two chrome rings, an outer one with classic tempo scale and an inner one for multimedia, infotainment, navigation and information. Thus, a perfect readability as well as fast information processing should be guaranteed at all times.

The whole thing is controlled by a Multicontroller, which is attached to the left side of the handlebar. This controller basically consists of a kind of steering wheel, which can be pushed to the left and right, as well as up and down.

Many modern motorcycles do not have a digital interface. Others have a digital display, but in most cases this is confusing, difficult to use and not very appealing.
Apart from the fact that most of the time they are not nice to look at, the unclear and difficult to operate cockpit of most current motorcycles can lead to accidents.
Our goal is to avoid exactly that. All important information should be visible quickly and everything else should be easy to call up.
At the beginning of the project, we could imagine implementing this with a well-designed digital interface, controls at various places on the handlebars, in the motorcycle helmet, on the windshield, as well as the tank bag and exterior mirrors. We deliberately considered whether it would be necessary to have a visor on the screen, but we agreed at a very early stage that we wanted to take a more reduced approach to this project. When riding a motorcycle, the feeling and closeness to the road, which is disturbed by constant fade-ins in the viewing window, counts. In addition, the technology required for this is not yet fully developed and very expensive. At that time, the first steps were planned to include interviews with motorcycling of all kinds. This would allow us to capture a use case and analyze it. Based on these and other methods, we will create the first scribbles with a focus on functionality and layout. Furthermore, we have to define which control elements we will use on the bike and which ones are rather unsuitable. Furthermore, our plan was to build a haptic model to check our assumptions. In order to show the emotions for the ride and the motorcycle and its interface, we planned a small film.

We examined current systems for their strengths and weaknesses and conducted interviews to find out what users wanted and where there was potential for improvement. Then we structured the insights with the help of affinity maps and other methods.

By sketching different screen layouts, we tested which shapes are usable for our concept and which are rather unfavorable.
Each screen was analyzed for advantages and disadvantages.

The steering concept consists of two knobs on the right side of the handlebar for volume control and on the left side is a newly designed control element. This can be pushed to the right and left, as well as up and down. Pressing up hard will return you to the home screen, pressing down hard will take you to a parallel open application.

The final screens were created after several intererations and improvements. We are proud of the system we have created and are confident that it will change motorcycling forever. Detailed information about the detailed development, as well as insights into the design process can be found in the attached documentation.

After all screens had been created in Illustrator, they could be animated in After-Effects.

In order to give the animation a little more life, we saw it as our task to make film shots of the motorcycle we had chosen and to cut it to match the animation. So all features could be explained optimally. The film was then cut and dubbed (self-generated engine sounds with an app) for premiere.

Looking back, we are very satisfied with the result of the project. As in every previous project, we encountered some challenges this time, which were difficult at first. Unlike in previous projects, however, we had to plan with another component this time. The control system. Due to the very reduced control possibilities, many previously unknown dead ends were formed, through which we were able to learn a lot and learned how to deal with reclamation. Also, the challenge to design an interface as rough and simple as possible was a new approach for us.
In addition to control, legal requirements, user wishes and our own demands, the available time was of course a decisive factor that limited many features, ideas and concepts.

Nevertheless, we are more than satisfied with the final result and received a lot of positive feedback on the project. Furthermore, we were able to take along a lot of input, incentives as well as possibilities to solve problems and were extremely satisfied with the support.

At this point we would like to thank you for the competent and constructive support, as well as the many people who supported us with feedback, a motorcycle for filming and incentives.

View all posts by stevevb1

This site uses Akismet to reduce spam. Learn how your comment data is processed.